There is a major new version of Android coming out later in 2019 called Android 10 (codename Android Q).

Google released its first beta preview in March with the plan to release 6 more beta updates for Android developers. The full public version is scheduled to come out in the fall of 2019.

Here are some of the new features in Android Q:

While it’s certainly not easy to learn to develop apps for Android’s app ecosystem, it is one of the most highly sought after skills in the new economy and there is a huge demand for skilled Android developers.

In terms of marketshare, Android is absolutely clobbering iOS with a whopping 76% of the global market in 2019 and 2.5 billion active users.

The growth and mobile operating system dominance of Android will continue for the foreseeable future. iOS is holding steady at 22% of the global market and Huawei recently announced they will plan to launch a new mobile OS called Hong Meng that may be a future competitor.

The demand for Android developers will likely continue to increase and the pay for an experienced Android app developer can be very good with an average above $100,000 a year in the United States. 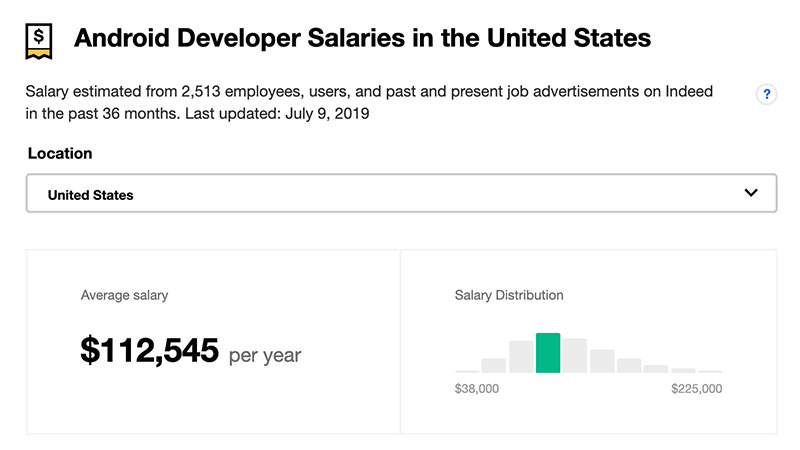 The fastest way to learn Android 10 development is by the do-it-yourself hacker approach online.

Preferably you already you already have some experience with computer programming languages like Java, C or C++.

If not, the learning curve will be much steeper but learning Android development is still  do-able with a lot of focus and determination. You may want to take an introductory computer science courses first to establish the fundamentals.

Here’s how to get started:

2. tart getting familiar with the Android API (Application Programming Interface) to better understand the creative and technical possibilities for developing Android apps.

3. Create your first “Hello World” app with this easy-to-follow tutorial for beginners from Google.

4. Google recommends a number of free online courses to learn Android development and they also provided extensive documentation for learning Android as a self-directed learner.

5. You can access more Android development tools by signing up as an Android Developer on Google Play (there’s a one-time $25 registration fee).

6. Subscribe and follow the Google Android Developers blog to learn about new developments in the Android app ecosystem.

7. Another essential resource to follow is Google’s Training Resources For Android App Developers.

8 Download a copy of Android Q Beta and start playing around with the latest version of the Android mobile operating system. Many Android devices are not currently supported, Google recommend using one of their Pixel smartphones.

That’s basically covers everything you need to get up and running making your first Android app.

Becoming a successful Android app developer is a long and difficult road but it can be a highly lucrative profession if you enjoy coding and you find that you’re talented at it.