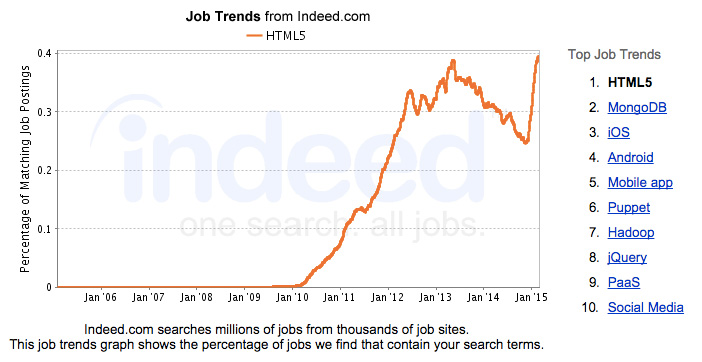 The Top 10 Most Valuable Digital Skills You Can Learn Online

The biggest game changer in the 21st century economy is the automation of routine work. It is now possible for automation technology and software algorithms to replace many of the routine “white collar” administrative and middle management positions that have supported the traditional middle class.

Dan Pink, in his book A Whole New Mind, writes about how automation is killing off many of the jobs that were considered staples of the past 100 years. Anything and everything that is repetitious or lacks creative thinking or social connection is being replaced by programs and robots that can do it faster, cheaper, and with little to no mistakes.

To get ahead in today’s world, and to stay ahead in tomorrow’s, learning how to code provides a valuable digital skill that is still in short supply. Programming is the best way to stay one step ahead of technology, for the simple fact that you’ll be on the frontline creating and programming the new technology.

But, there are so many programming languages, which one should you chose? Where do you begin? Coding invariably goes beyond writing into a box on your computer screen, yes it’s a language, but the true skill is in how you use it. What language you chose will depend on what you’re most interested in, but the first and most important step is to get the basics done. Start with the fundamentals of coding by reading our guide to Why You Should Learn How To Code.

With this broad overview of coding understood, you can then branch off into an area that interests you. If you look at Indeed’s Job Trends, most of them require some element of coding. Listed below are the top 10 skills, what they are, what you can do with them, and how to get started learning them.

As you might already know, HTML is the language of the web, and HTML5 is the next step in the web’s evolution toward better interactivity and a seamless experience on all Internet-connected devices.

One of the big benefits of HTML5, and something that likely helped push it to the top spot in Indeed’s job trends, is the cross-platform nature of it. The ability to build interactive media that works on all devices on the open web — as opposed to the closed ecosystems of Android or iOS — is the defining advantage of HTML5

There are a number of places you can start learning HTML5. Given its popularity, a simple web search will bring back more results than you’d care to look through — so instead of trying, here’s my recommendation: Learn HTML5 Programming from Scratch for free on Udemy.

MongoDB is a document-oriented database, which uses readable documents rather than the more traditional table-based structure. It’s defined as a NoSQL database, or “not only structured query language,” in reference to the ability to use these readable documents, and is a type of database that’s becoming increasing popular.

MongoDB is ahead of the competition though, given that it’s easier to learn than the majority of other NoSQL databases, and many big companies are already familiar with it— Craigslist, eBay, the New York Times, Disney, Cisco, and Foursquare to name but a few.

I mentioned it’s ease of learning, which is made all the more accessible given that they provide MongoDB University through their website, a place where you can take part in online courses and even earn a certificate.

Try walking down a busy street and not see someone holding an iPhone. It just doesn’t happen anymore. Apple is taking over the world, and people are jumping on board.

Apple uses iOS for the iPhone and iPad, and Swift is the language you’ll want to learn if you want in on programming it. That would be an understandable move, considering that the average salary for a Swift developer is $100,000; and also that Apple don’t seem to be going anywhere — they sold 74.5 million iPhones in the final quarter of 2015.

Apple’s main competition in the phone market is Android. The ‘other’ smartphone might not be quite as iconic as the iPhone, but it might surprise you to know that it has a greater market share — actually, they’re soaring high over all the competition with 85% of the global market in 2014.

Of course, the company behind Android is Google, another juggernaut trying to take over the world, which makes it seem less surprising. Whether you choose to code for iPhone or Android, you can rest assured that these two company’s ecosystems won’t be disappearing anytime soon.

According to Puppet Labs website, Puppet “gives you the power to easily automate repetitive tasks, quickly deploy critical applications, and proactively manage infrastructure, both on-premise and in the cloud.”

If that all sounds little confusing, that’s to be expected— Puppet is a powerful and versatile solution, but its heart is in automation of both physical and virtual systems. It’s used by a host of companies including Reddit, Twitter, PayPal, Disney, Spotify, Mozilla, and Google.

My recommendation for learning Puppet online: The PuppetLabs Workshop.

If you own one of those aforementioned iPhone or Android smartphones — and chances are you do — then you’ve also likely downloaded a host of apps that you regularly use.

The app world is huge and only growing. There were more than 100 billion app downloads back in 2013, and there’s projected to be 279 billion in 2017. Sure, most apps are free, yet Apple still made $4 billion in 2014 from its App Store alone. Apps are also a great way to get into programming in a very creative way, where you can develop your own games and really get the imagination going.

For a deeper dive into developing apps, read our guides for how to learn Android App Development online and why you should learn iOS 9 and Swift online.

Hadoop is another database — like MongoDB — that specializes in working with big data.

It’s far more difficult to learn than MongoDB, but Hadoop’s power and cost-effectiveness make it a popular choice. The New York Times used Hadoop to help convert 4 million entries into PDFs, and Pete Warden used it to analyze 220 million Facebook accounts in under 11 hours — for a cost of $100. If you like the idea of working with big data, Hadoop is the place to do it.

My recommendation for learning Hadoop online is Hadoop Fundamentals from Big Data University.

jQuery works with HTML, to help make your websites respond to user interaction.

It’s a JavaScript library that simplifies the writing of HTML scripts, making interaction and animation an easier process. Many people recommend getting to grips with JavaScript first, and while that’s not necessary, it can help hasten the process and will put another useful language under your belt. If you’re interested in making your websites interactive or embellish them with animations, then jQuery is the one for you.

My recommendation for learning jQuery online: The jQuery Track on CodeAcademy.

9. PAAS (Platform As A Service)

I mentioned one big buzzword earlier in big data, another is cloud computing.

PaaS is a platform for developing and running web applications. The cloud is becoming a popular and effective medium for companies to deploy their software, one big name to note is Adobe, whose lines of Photoshop, Illustrator, InDesign and others are now in the cloud, allowing the usage of them without the need to download large programs onto the computer, and making them accessible from any device with an internet connection.

My recommendation for learning more about PAAS online: Google Cloud Platform or Heroku. You will need advanced programming skills to tackle this challenge.

Lastly we come to social media, which is the one of today’s most valuable digital skills that doesn’t require you to learn programming.

Considering we have an enormous amount of data being poured out over the Internet every second, coupled with more and more people choosing to spend a good chunk of their time nestled inside it, the skilled use of social media is an important skill. Getting attention in today’s world is far different from those past — it takes more than money, it takes a platform and the knowledge of how to use it.

The theory behind programming is the most important thing you’ll learn. Logic, reasoning, and creativity will win out in the long run over an expert knowledge of a single language.

The ultimate digital skillset in the 21st century is the ability to build your creative ideas with technology. If you’re going to learn to code, I recommend watching this excellent TEDx Talk on why you need to not just learn to code, but also learn to think more creatively about the process of solving problems.

As time goes by, things change, and programming is no different. New languages will pop up that need coders, old languages will die out when something better comes in — the way to stay ahead is to develop a core understanding that underlies all languages, doing so lessens the burden of switching or learning new ones, and gives you a large competitive edge over those that haven’t.

None of these highly valuable digital skills are particularly easy to learn, which is exactly why they are so valuable. With these skills in your career toolbox, you’ll be able to build a successful career building the future of the Internet.

Rapid Skill Acquisition: Autodidactism And Meta-Learning As A Skill

The Flow Mindset: How To Be Highly Productive Without A Boss