What’s The Difference Between Binaural Beats Vs Isochronic Tones?

One of the most common questions about brainwave entrainment is about the difference between binaural beats and isochronic tones.

While there has been much more studies showing the efficacy of binaural beats, anecdotally many people online prefer isochronic tones.

I would recommend experimenting both binaural betas and isochronic tones for yourself to see which of them work best for you.

A Comparison of Binaural Beats Vs Isochronic Tones: 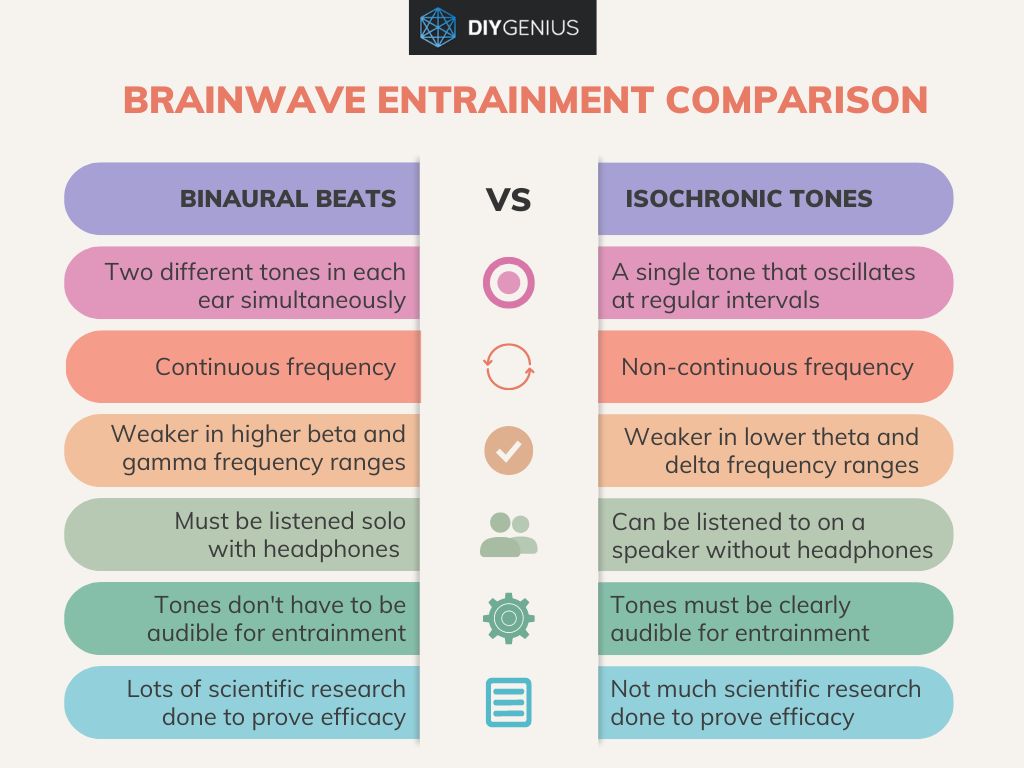 While many people love using binaural beats and find they have a significant effect, a number of people find they experience no noticeable effect.

Many people who do not respond well to binaural beats often respond very well to isochronic tones so it’s best to experiment with both to find what works best for you.

Here’s are the key differences between binaural beats and isochronic tones:

He discovered when signals of two different frequencies are presented separately, one to each ears, your brain detects the phase variation between the frequencies and tries to reconcile that difference.

They were popularized by American business executive and radio producer Robert Monroe in the early 1970’s when he wrote the cult classic Journeys Out of the Body sharing his experiences with brainwave entrainment and a series of powerful out-of-body experiences he had using binaural beats.

Isochronic tones were discovered in a scientific study by Dr. Arturo Manns in 1981 conducted at the Universidad de los Andes in Santiago, Chile.

His research found that isochronic tones produce a stronger brainwave entrainment effect when compared to binaural beats but I don’t know of any peer-reviewed research studies since that back up the superior effectiveness of isochronic tones.

The key advantage of binaural beats is they don’t have to be audible for brainwave entrainment to take place (provided you’re listening to them with headphones) and many people find them easier to listen to because the sound of the frequencies are much quieter.

This makes it much easier to use binaural beats for the lower frequencies such as theta and delta waves if you want to listen to them as you fall asleep.

The key advantage of isochronic tones (and monaural beats) is you don’t need to listen to them with headphones for the brainwave entrainment to take place but the frequencies must be played  at a much louder volume to have the desired entrainment effect.

However, to get the fastest and deepest brain entrainment effect with isochronic tones I find it’s still best to use headphones.

The Advantages And Disadvantages For Brainwave Entrainment

This short educational video gives a good summary of the advantages and disadvantages of binaural beats and isochronic tones.

What has been your experience, do you prefer listening to binaural beats or isochronic tones?