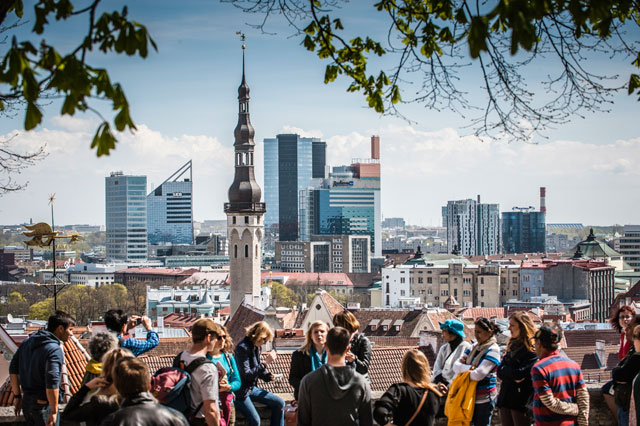 Is This The Future of Digital Citizenship? Estonia’s Networked Society

“It’s not so much about the size of the country, but the thinking. The size does not matter. The thinking matters. You need also to re-think and think differently.” – Linnar Viik

Estonia is a tiny but remarkable country. After the collapse of the Soviet Union, they had to re-build their political and economic institutions from the ground up. The combination of a relative lack of infrastructure and a forward-thinking government lead the country to aggressively adopt digital technology with the emergence of the world wide web in the mid-1990’s.

Today, Estonia is one of the most wired societies in the world. Their X-Road digital communications infrastructure links the entire country in a seamless network that connects government, business and citizens together. Each Estonian citizen interacts with the system through an electronic ID that provides their digital citizenship footprint.

It is not just the Estonian government that has taken this innovative approach to Internet connectivity, Estonian startups and businesses are also a global force for innovation, despite the country only having 1.3 million people. Estonia produces more startups per capita than any other country in Europe. The country has produced huge success stories like Skype, TransferWise, Fits.me, Toggl and Zerply.

The E-Estonia system will seem a little Orwellian to some people. Watching the documentary about the system above made me think of the potential dark side of a digital citizenship system in the wrong hands.

However, the system clearly improves lives of Estonian citizens. In a sense, it actually increases their freedom by streamlining their interactions with their government, which makes large and grossly inefficient government bureaucracies less necessary. This could be the reason why Estonians enjoy excellent social services and also pay low taxes by European standards.

The most notable way it improves the lives of Estonians is by reducing the amount of paperwork and time wasted waiting in long lines at government offices. Estonians can renew their passports, update their drivers license, register a new business and access their voting or medical records instantly through the digital citizenship system.

The system is also robust and secure, in fact, it seems a lot more secure than more traditional paper files where it is difficult to track who views them. With their E-Estonia initiative, a digital footprint is created by all activity, which makes everything more secure. As a testament to what the Estonians have created, NATO chose to base their Cooperative Cyber Defence initiative in the Estonian capital of Tallinn.

Regardless of whether you find E-Estonia’s digital citizenship system Orwellian or innovation genius, technology is going to transform the nature of government, citizenship and society itself. With the right digital infrastructure, we can replace inefficient bureaucracies with digital access passes and replace most politicians with crowdsourcing systems where citizens directly participate in the debate and then vote on the issues that affect their lives.

This kind of crowdsourced democracy would be greatly preferable to the current system where we elect a politician to represent us for 4 year terms and then once elected, they usually implement a different agenda.

With faith in governments near all-time lows, it is imperative that we use technology to reinvent the political status quo. I believe that the Internet offers us a unique opportunity to cultivate a revival of community by empowering people to learn, work and live in radically new ways.

A new globally integrated civilization is emerging, which is rendering our Industrial era institutions obsolete. The Promethean challenge we face today is the need to create new political and economic institutions for a globalized world that can decentralize power and money while re-empowering local communities to take control their own health, education and governance.

But I agree with what is said in the Life In A Networked Society documentary, we will get the future that we believe in and actively work toward creating together. With the right technological tools and creative skills, we can use the Internet to promote the values and causes we are passionate about and build stronger communities around them.

1. The Networked Society, On the Brink

On The Brink discusses the past, present and future of connectivity with insights from technological thought leaders.

2. Thinking Cities in the Networked Society

Thinking Cities deals with one of the most dramatic societal trends happening today: urbanization.

3. On The Money, Networked Society

A film about money, value and trust in the Networked Society.

4. The Future of Learning, Networked Society

The Future of Learning looks at the dynamic shift in mindset in today’s digital age and the potential to redefine how we learn and educate.

What do you think of the Networked Society and digital citizenship, is it a promising development or too Orwellian for your tastes?