Why Panama Is A Tropical Playground For Adventure Travel

Panama is the ultimate tropical playground for adventure travel enthusiasts who love both mountains and beaches.

Defined by its unique position in the Americas as a land bridge between major continents and oceans in the Western Hemisphere, the Panamanian isthmus is one of the world’s most important biodiversity and wildlife migration corridors.

If you love adventure sports and the sunny tropical climate then Panama City offers a great launching point for exploring the surrounding mountain landscapes and oceanside destinations. 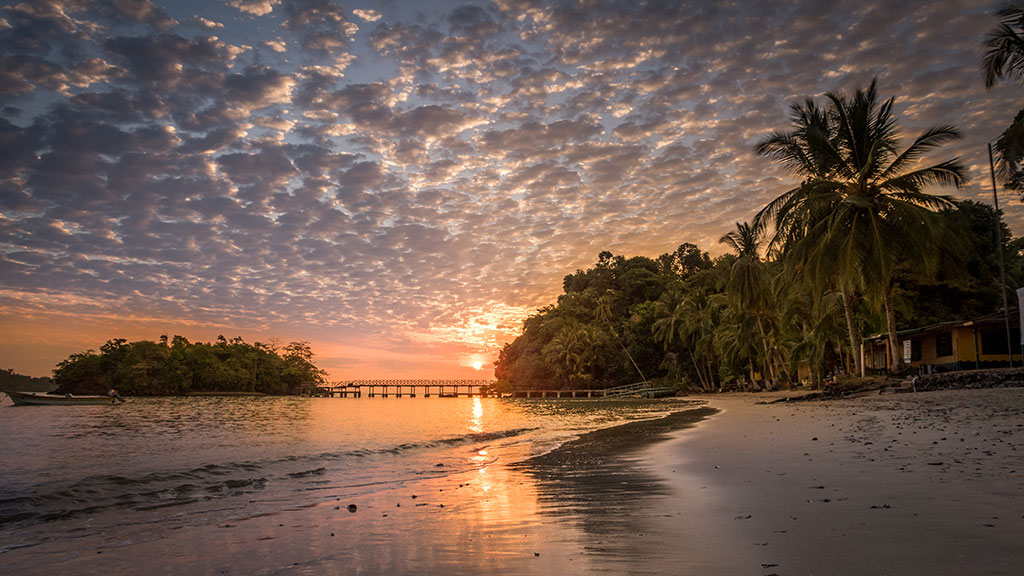 The sunrise lights up the golden morning sky on Coiba Island, the largest island in Central America.

Panama is the only place in the world where you can easily watch the sunrise over the Caribbean and the sunset over the Pacific Ocean — from the same spot!

Imagine yourself waking up to watch the sunrise reflected on the azul waters of the Caribbean Sea in seaside Portobello National Park and then watching the sunset over the deep blue waters of the Pacific Ocean from The Pearl Islands in the Gulf Panama, a 70-island archipelago where 95% of the islands are undeveloped jungles, beaches and coral reefs.

Or, you can stay on beautiful Cerro Azul just south of Panama City and watch both the sunrise and sunset while hiking and birdwatching in the cloud forests of Chagres National Park. 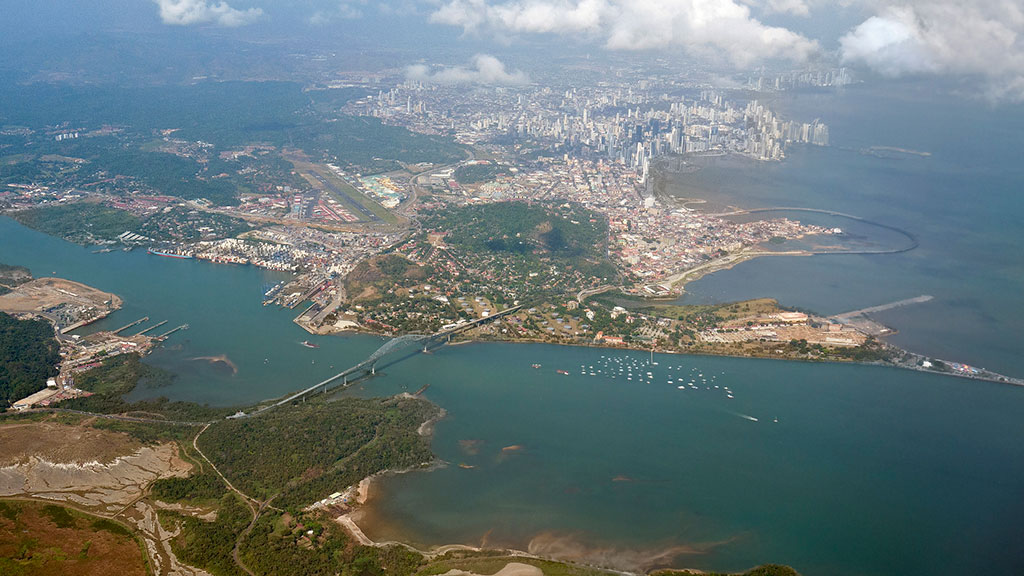 The southern entrance to the Panama Canal with the rainforests of Ancon Hill and Metropolitan Nature Park in the foreground and Panama City’s skyline in the background.

When the American military engineers and architects designed the Panama Canal they protected the watershed of the Panama Canal in a series of national parks to provide the millions of gallons of freshwater required to float gigantic container ships across a mountain range.

Today, the Panama Canal watershed consists of 552,761 hectares (1,365,902 acres) of national parks and protected rainforest reserves. You will find 500 square miles of virgin rainforest in Chagres National Park and Soberanía National Park is home to world-famous birding mecca Pipeline Road, upon which the Audubon Society organized a world record census in 1996 that recorded 525 species of birds in a single day.

Over 1,000 species of birds have been recorded in Panama’s rainforests, giving it some of the highest avian fauna biodiversity in the world and making Panama the world’s most popular tropical destination specifically for tropical birdwatching.

The Beach Lifestyle In Panama:

The view from the hiking trails in Altos de Campana National Park of Punta Chame.

Panama has two coastlines with thousands of miles of beaches, islands and coral reefs.

A line drawn from the Costa Rican frontier in the west to the Colombian border in the east would extend only 480 miles (770 km) making nearly every nature destination accessible within a single day’s drive from Panama City.

If you love beaches, there are excellent sandy beaches just a 30-minute ferry away on Toboga Island or you can take a 90-minute ferry from downtown Panama City to the Pearl Islands and explore this mostly untouched chain of islands in the middle of the Gulf of Panama.

About an hour’s drive away from Panama City is the Playa Coronado resort area where you will find Punta Chame, an excellent spot for kiteboarding, surfing and water sports.

Further south is legendary surfing town Playa Venao and the California-like coast of Santa Catalina, which offers easy access to the ecological wonders of Coiba Island, an almost completely undeveloped 503 square km (194 square mile) island that is the largest in Central America.

The Mountain Lifestyle In Panama: 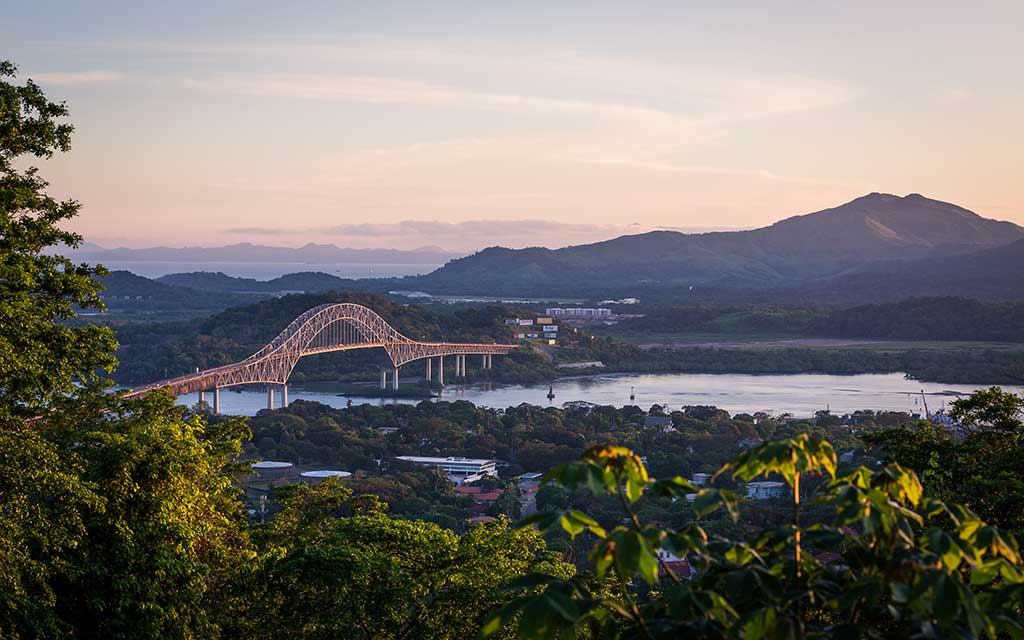 Panama City is surrounded by rich tropical rainforests that are some of the most studied in the world thanks to the Smithsonian Tropical Institute and their research station on Barro Colorado Island.

There’s even a rainforest in the city in 573-acre Metropolitan Natural Park, which has good hiking trails overlooking the city skyline through the thick jungle. There’s also a brand new museum designed by architect Frank Gehry that tells the billion-year history of the formation of continents and how Panama became the ecological crossroads of the Americas.

The central mountains of the Sierra de Veraguas range divides the Panamanian isthmus near Panama City and rises to 3,300 feet (1,000 m) at the highest peak Cerro Jefe.

A short drive to the east from the city is the expat community on Cerro Azul, which enjoys more temperate mountain temperatures than Panama City (about 5-6 degrees celsius cooler). Here you will find mountain lookouts on the road to Cerro Azul that offer sweeping views of both the Gulf of Panama and the Caribbean Sea.

In the mountains to the west, you will find picturesque hiking trails with sweeping vistas of  the Gulf of Panama in Altos de Campana National Park and Valle De Anton, the only town in the world inside a volcanic crater. To the north of this area, you will find the beautiful mountain towns of Santa Fe and El Cope, which are the main access points for backcountry hiking and camping in Santa Fe National Park and Omar Torrijos National Park. 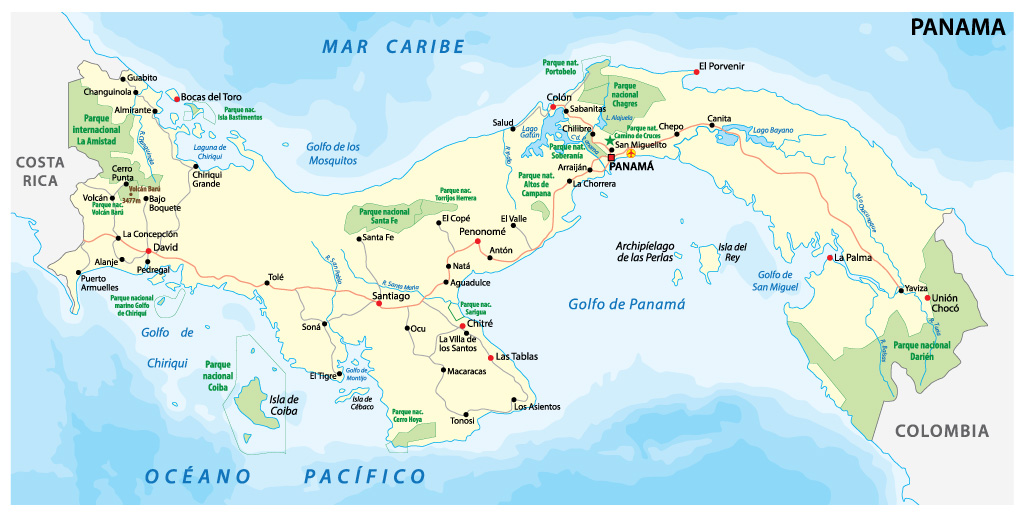 A quarter of Panama is protected in 17 national parks and protected rainforest reserves.

Here are some of the must-see adventure travel destinations in Panama:

The island archipelago of Bocas Del Toro is found in the northeast of the country near the Costa Rican border. This is an ideal spot for basing yourself if you love nature, sailing, scuba diving, swimming, surfing and exploring in Bastimentos National Park. 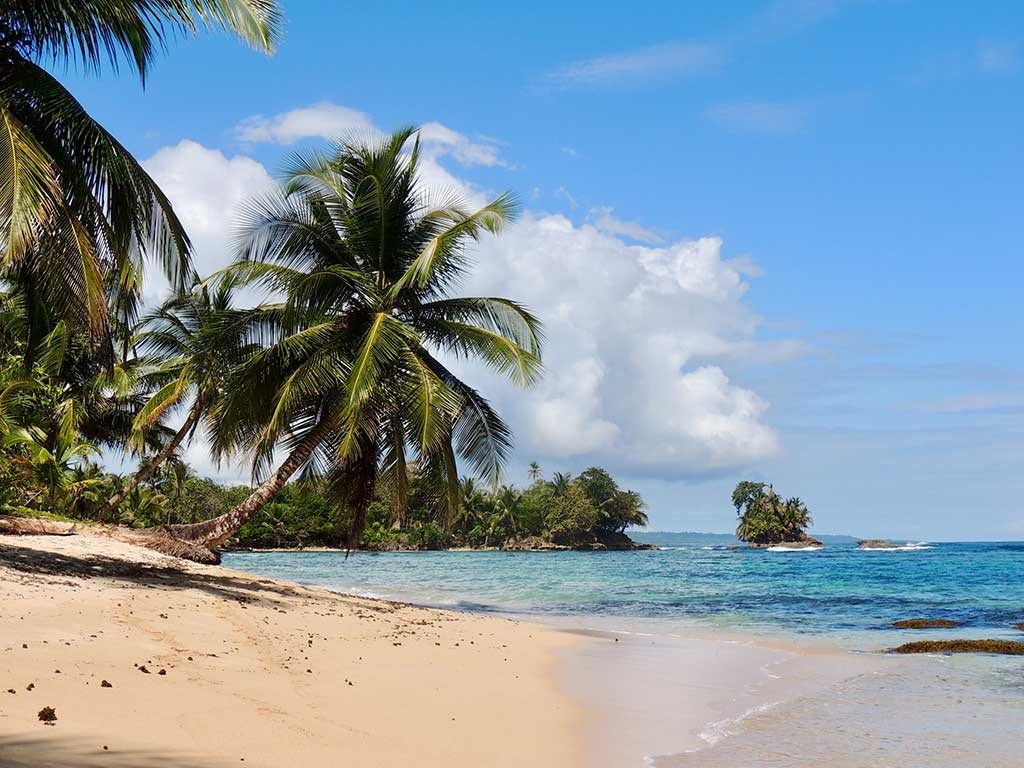 2. Guna Yala: Unplug, Relax And Recharge In An Indigenous-Run Paradise 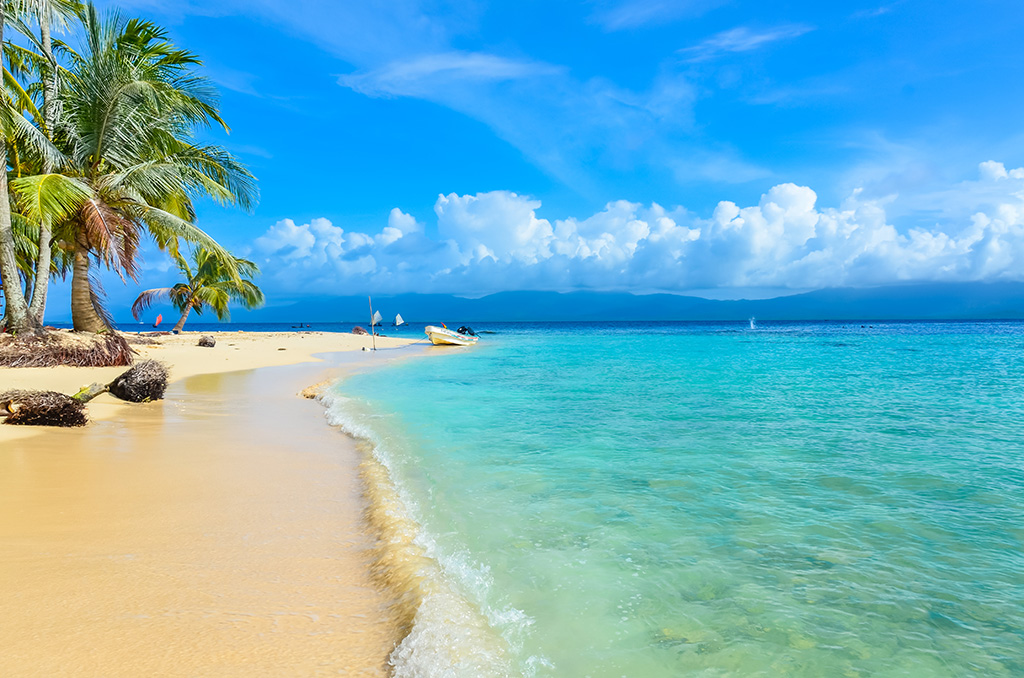 The crystal clear waters of Guna Yala with the mountains on the Panamanian mainland in the distance.

Guna Yala (also known as the San Blas Islands) is an archipelago of 365 islands and cays, of which 49 are inhabited by the indigenous Guna Yala people. This is an ideal place for ecotourism and is a popular spot for sailing, relaxing on the beach and beach-hopping.

If you prefer the mountain lifestyle, Boquete is the largest expat hub outside of Panama City. English is commonly spoken here and the mountain trekking in La Amistad and Volcan Baru National Parks is some of the best in Central America. 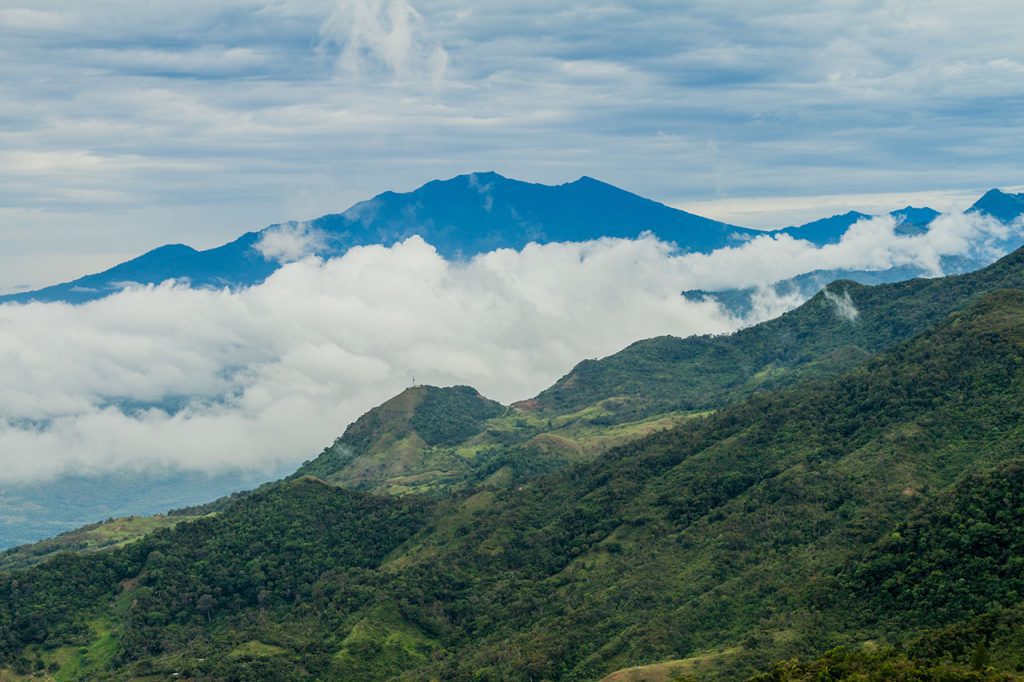 In the north of the country is the mountain adventure town of Boquete and Volcán Barú, the highest mountain in Panama at 3,475 metres (11,401 ft) high.

If you’re looking for a surfer’s paradise then Playa Venao is your spot. Tucked away at the end of the laid back Azuero Peninsula, this surf town reminds me of Puerto Escondido in Mexico and it is one of the best places in Central America to surf without crowded waves. 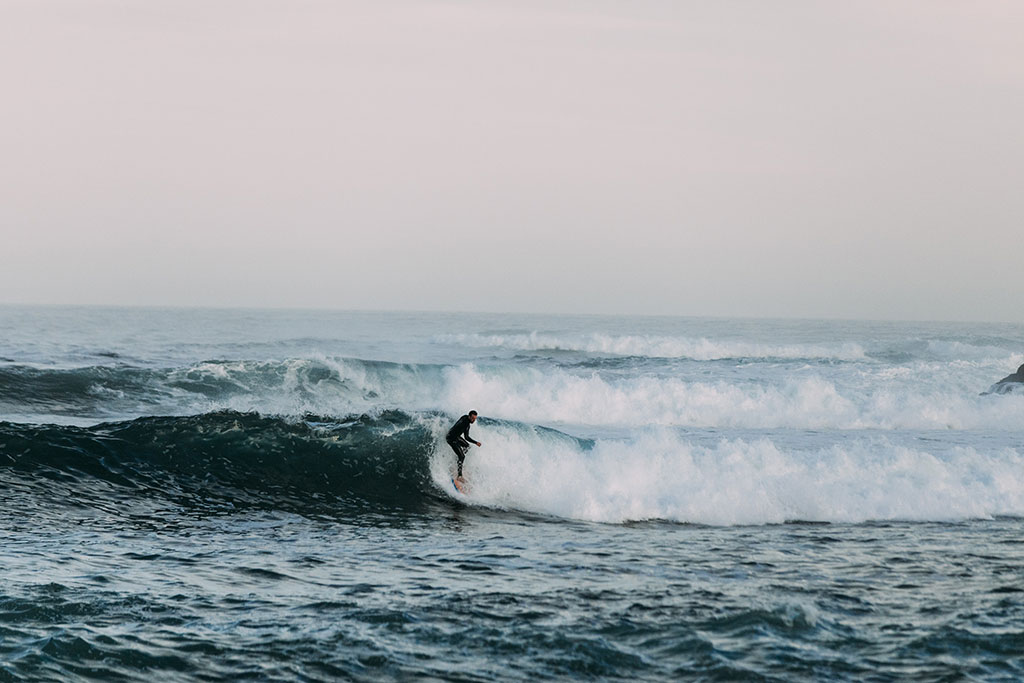 5. The Darién Gap: Trekking In The Wild Jungle

If you really want to get off-the-beaten-track there is excellent trekking through some of the most impenetrable rainforests and mountain watersheds in the tropics in Darién National Park in the far south of Panama. 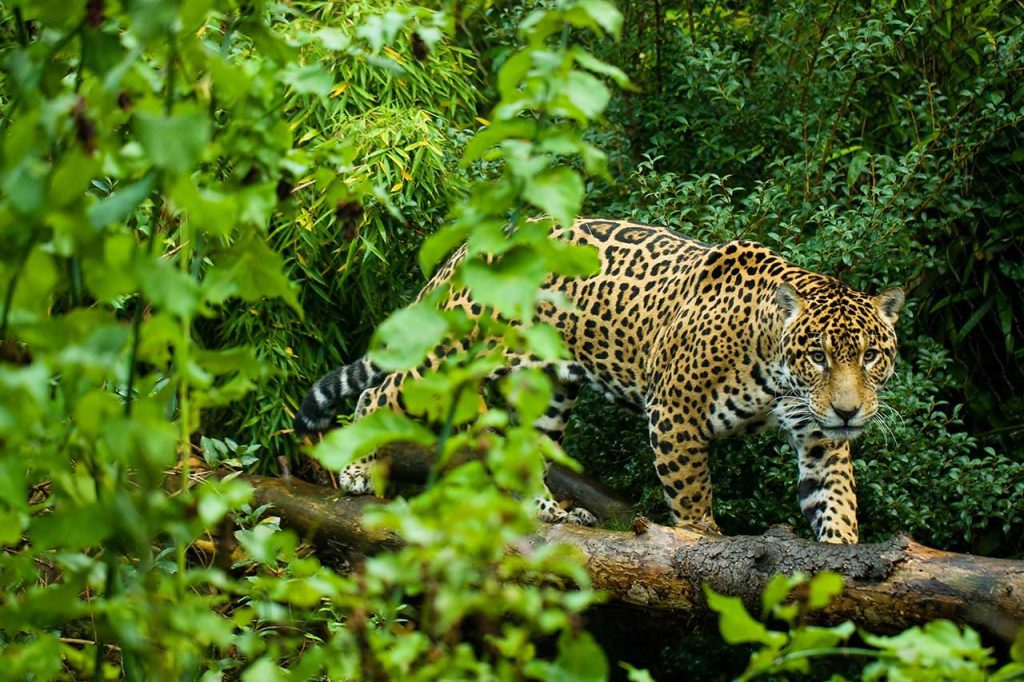 The Darien Gap provides the largest remaining habit of the Jaguar in Central America, the largest of the 5 cat species found in Panama’s tropical jungles.

The Darién Gap is a break across the North and South American continents of 106 kilometers (66 miles), the only gap of impenetrable wilderness along the Pan-American Highway that stretches 30,000 kilometers (19,000 miles) from Patagonia to Alaska.

So, there you have it, an adventure travel guide to Panama’s incredible beaches and mountains. Whether you want to surf, swim, kiteboard, trek, camp, mountain bike or explore the backcountry wilderness, Panama has it all — without the big crowds of tourists you will encounter in Costa Rica to the north.