Hooked: The Psychology of Variable Rewards and Dopamine Loops

Imagine a full day completely unplugged from your smartphone. Could you do it?

In this hyperconnected world, it’s important to develop rituals for fully unplugging if you want to maintain your recharge on the weekend.

Too much time spent on your smartphone has been shown to increase your risk for both physical and mental illnesses.

Studies have shown that overuse can have a negative impact on your posture, eyesight, hearing, and sitting too much can take years off your lifespan. Those who overused their smartphones and social networking apps like Facebook are more likely to score higher on the depression and anxiety scales.

But what exactly is considered excessive use? It’s hard to say but most smartphone users probably use their device more than they would like to.

Hooked: The Psychology of Variable Rewards

Since the average smartphone regularly uses less than 10 apps on their phone, any successful app needs to create a daily habit so they have a consistently returning customer base.

The way apps engineers and user experience designers do this is using what’s called The Hook Model. It is based on the research done by B.J. Fogg into Behavior Design at Stanford University and his habit formation model that was adapted for the technology industry by Nir Ayal in his Silicon Valley classic Hooked: How To Build Habit-Forming Products.

When I worked with Fitplan to create and launch their app summer of 2016, we carefully followed the Hook Model to design a user experience where users of the app would form the habit of using the app every time they would go to the gym.

It’s standard practice in Silicon Valley to follow this model because if you don’t follow it or something similar, your app will more than likely end up in trash heap among the 1 million+ of forgotten apps that have never turned a profit for their creators. 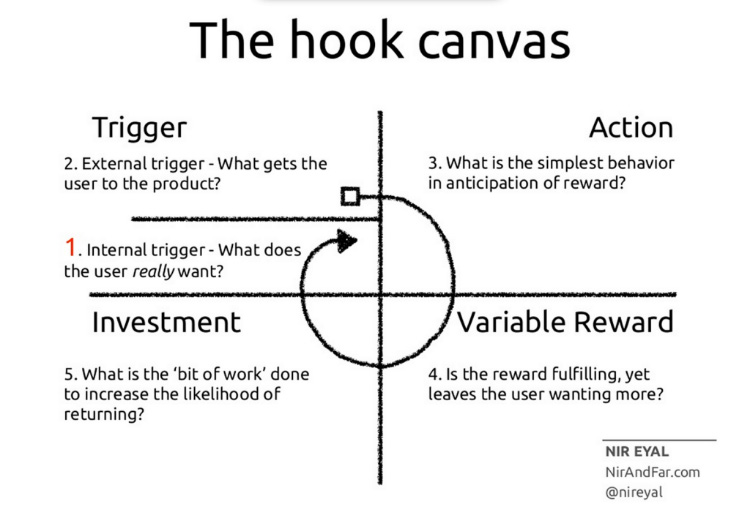 Based on the Hooked Canvas shown above, the most effective method that social media apps employ to keep us hooked is variable rewards.

A variable reward is a temporarily fulfilling reward that ultimately leaves you wanting more. Features like autoplay, the infinite scroll, chronological timelines, likes and comments, and automatic push notifications provide us with a constant stream of variable rewards.

1. Instant Gratification: when we’re bored or anxious, Facebook provides you with a personalized and unending stream of new information and content to distract yourself with.

2. Social Validation: when you share your own opinions and content in the form of status updates and photos with your friends in your social network it provides you with social validation in the form of likes, comments, and shares.

This regular process of both instant gratification and social validation releases bursts of dopamine, which is our seeking-and-reward neurochemical (the one that is most closely linked to focus and motivation).

What happens from this consistent release of dopamine is the neural networks in our brains are rewired to do what makes feel good and to check our favorite social media apps regularly.

You’re never sure what you’re going to get when you check social media and that’s what makes it so compulsive and habit forming.

Every notification on your smartphone opens a dopamine ‘loop’ that desperately wants to be closed. This is what psychologists call the Zeigarnik Effect. The psychological pull of closing this loop is often too strong to resist. Before you know it, you’ve lost another 15 minutes of your time, all because of a single notification.

What’s also interesting about dopamine is it’s released more by the anticipation of a reward than from the feeling we get from the reward itself.

This is why we compulsively check our social streams for fear of missing out on something interesting and also why we continually craft our social media identities by posting new content to get more social approval in the form of likes and comments.

The result of all this is we invest our time and energy in building these social identities on their platforms in such a way that allows social media giants to better understand our habits and interests. In turn, this allows them to show us ads targeted to our interests that we are more likely to click on.

Want to break free from your smartphone addiction and harness the power of focused attention?

Take my free 5-day Flow Productivity Challenge and build habits that reclaim your mind from the social engineers that want to make you addicted to their product and services.