Coliving For Entrepreneurs: A New Way To Live, Work And Play

If you are an entrepreneur or freelancer with the freedom to be location independent then you should try out coliving.

Coliving spaces are popping up all over the world to service a new generation of location independent entrepreneurs, freelancers and remote employees who don’t want the typical 9-to-5 commuter lifestyle.

While the American Dream of the decades past was a house with a backyard in the suburbs, today’s entrepreneurs and social media creators value experiences more than possessions and the freedom to travel and create your own adventures is the ultimate experience.

At a coliving space, you are surrounded by other creative people from all over the world whom you can learn from and collaborate with. You can still enjoy your own private bedroom and bathroom while sharing a collective kitchen, meals, and workspace with others. This way you never have to eat alone.

We are witnessing a growing convergence of the worlds of work and travel. The “coliving dream” offers a new way to live, work and play that wasn’t possible a decade ago.

Millennials are now demanding more flexibility in their work and if productivity can be easily measured based on targets and measurable output, then what difference does it make how and where that work happens?

Coliving makes it possible to live, work, play and learn while you travel. While most people only get a few weeks of holidays a year, coliving allows you to visit new destinations throughout the year while still getting your work done.

It’s a growing lifestyle trend in 2019, particularly among Millenials who are finding themselves priced out of major cities and many creative people are embracing a different mindset that values the kind of freedom associated with being location independent.

Coliving has been described by some as having roommates with an app but for entrepreneurs and freelancers who need to focus on work, there are a lot of more premium options for surrounding yourself with other high energy creators so you can live, work and play together in style.

If you’re having trouble wrapping your mind around the concept of coliving, watch this video:

The following is a brief introduction to some emerging coliving brands listed by the number of locations around the world: 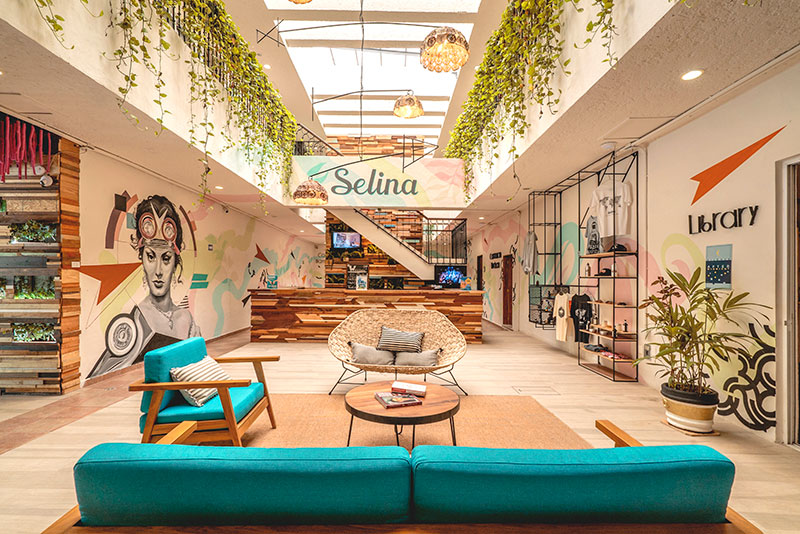 The trend toward remote work is a big one and investors are pouring money into coliving companies. Selina has raised $234 million from investors to fund their mission to create a global coliving network for a new generation of entrepreneurs, artists, and digital nomads.

Selina is the most rapidly growing coliving brand and they already have 63 locations in 13 countries with expansion plans to open 350 coliving spaces by 2023.

They seem to be making all the right moves, building their co-living spaces in trendy city neighborhoods, beachside resorts and mountain ski towns. Their long-term vision for digital nomad hotels is to have members pay around $US 1,000-$1,500/month and be able to travel globally to more than 100 cities and resort areas.

Selina’s focus is on building community-oriented cultural hubs by hiring local artists to create murals and art pieces all over their spaces. They also host daily meditation, yoga and wellness classes, and provide inexpensive space for meetups and events where local artists, musicians, and DJs entertain in the evenings. 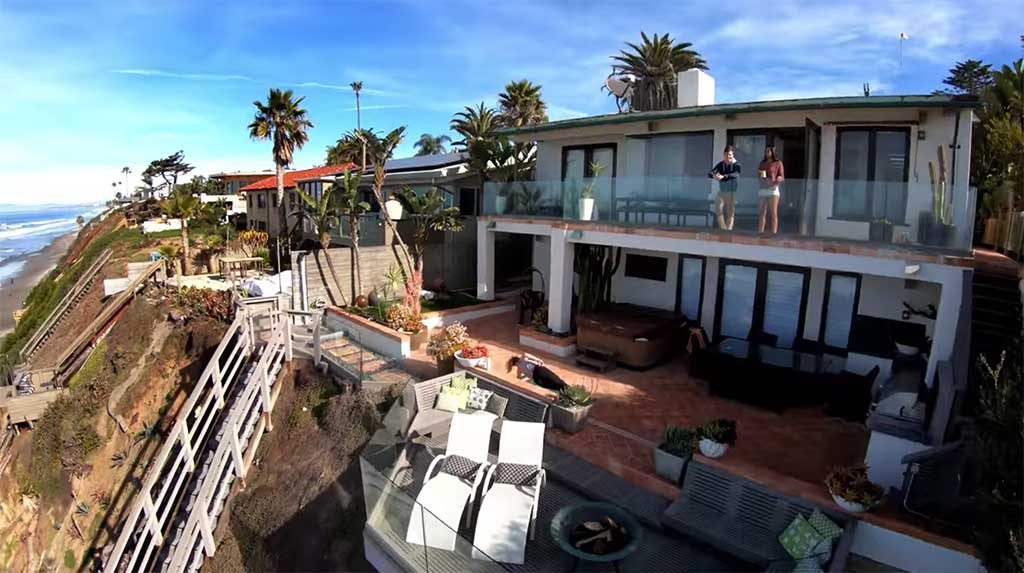 On the cliffs overlooking the Pacific Ocean at one of Outsite’s California locations.

Another coliving startup that has exploded in the last couple of years is Outsite.

They have also been aggressively opening coliving spaces in high-tech hotspots in the United States and trendy neighborhoods in international cities popular with the growing crowd of jet-setting entrepreneurs.

They have a membership system that gives you flexible access at their international locations, members perks, and a growing Expert Network. You can join their global coliving network of flexible professionals for $US 249/year, then paying by the week or the month when you stay at their locations.

It’s not clear how much venture capital they have raised but they participated in the 500 Startups program in 2017 and they had raised nearly $US 1.5 million at that point. With their rapid expansion, they must have some investors with deep pockets. 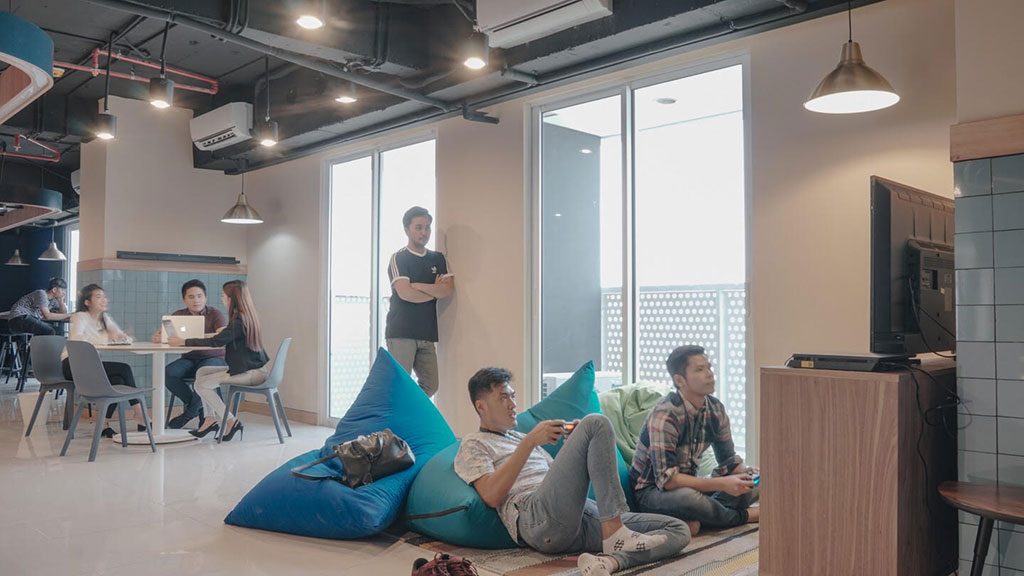 Taking a break from work and playing video games at CoWork’s Jakarta location.

My first experience with coliving was in Bali at Matra and as one of the world’s premier nomad hotspots, it’s only natural that an Indonesian company is furthering the frontiers of coliving in Asia.

CoHive’s coliving space concept is built around what they call the 4 co’s: convenience, coziness, coworking, and connections. They offer full-service apartments with their coworking spaces next door so you can live, work and play with your neighbors.

They also offer a concierge on standby, weekly cleaning and a growing community with plenty of activities and events.

They have six city and beachside coliving spaces across Indonesia in Jakarta, Medan, Tangerang, Bali, Yogyakarta, and Surabaya. 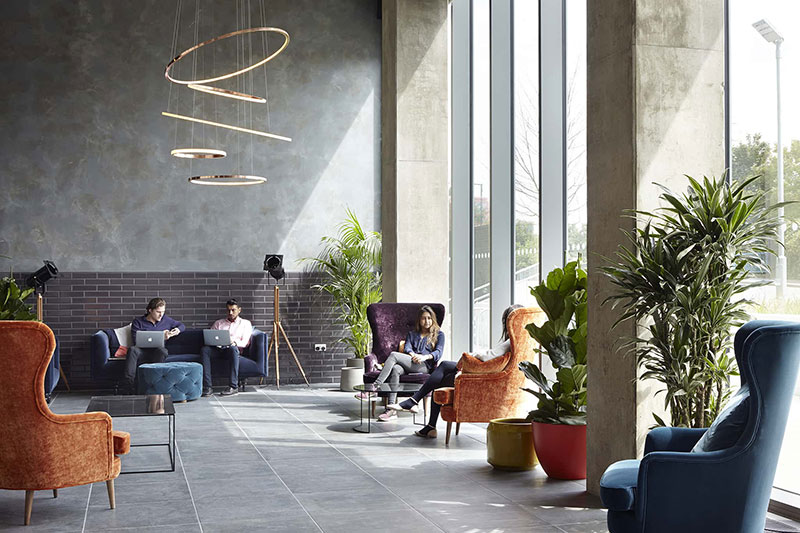 The slick interior in the reception hall of The Collective Old Oak in London, England.

The Collective has evolved out of a group of entrepreneurs who built the London Nest and the Collective Old Oak, which is the largest coliving space in the world.

They are more focused on longer-term coliving arrangements with 4-12 month memberships offered. The London coliving space is remarkable for its vision and design. It has everything you need from a library, themed dining rooms, a spa, cinema, gym, and multiple coworking spaces.

I am really impressed by their Zen space for working and thinking called the Secret Garden and their rooftop terrace with morning yoga classes, BBQs and open space for exercise and relaxation. 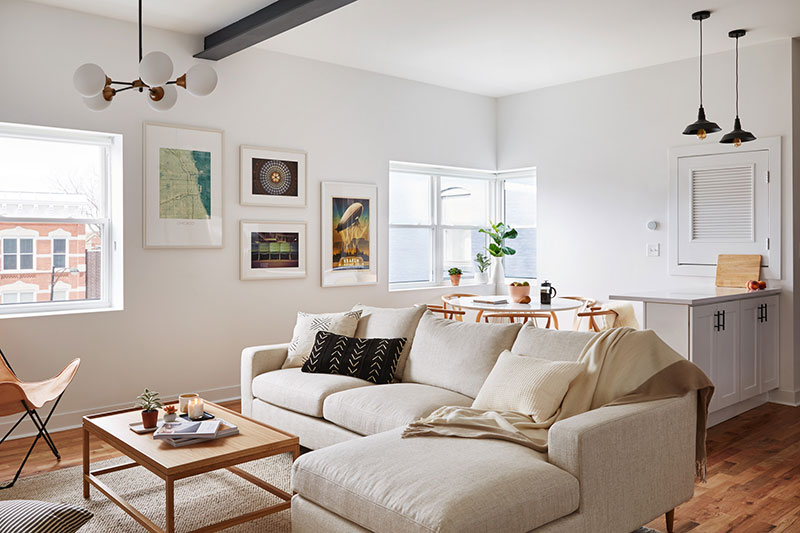 Members at Common enjoy the privacy of their own furnished bedrooms along with access to community spaces with an all-inclusive rate that covers rent, weekly cleanings, laundry on-site, household essentials like cookware and cleaning supplies stocked for you, and lightning-fast WiFi.

They are focused more on long-term coliving accommodations in big American cities. You must fill out an application form on their site that includes a background check and chat with one of their “home specialists”. They offer in-person tour and virtual tours remotely.

There are similar coliving players that do coliving leasing such as Ollie, Quarters, X Social Communities, StartCity, and WeLive. 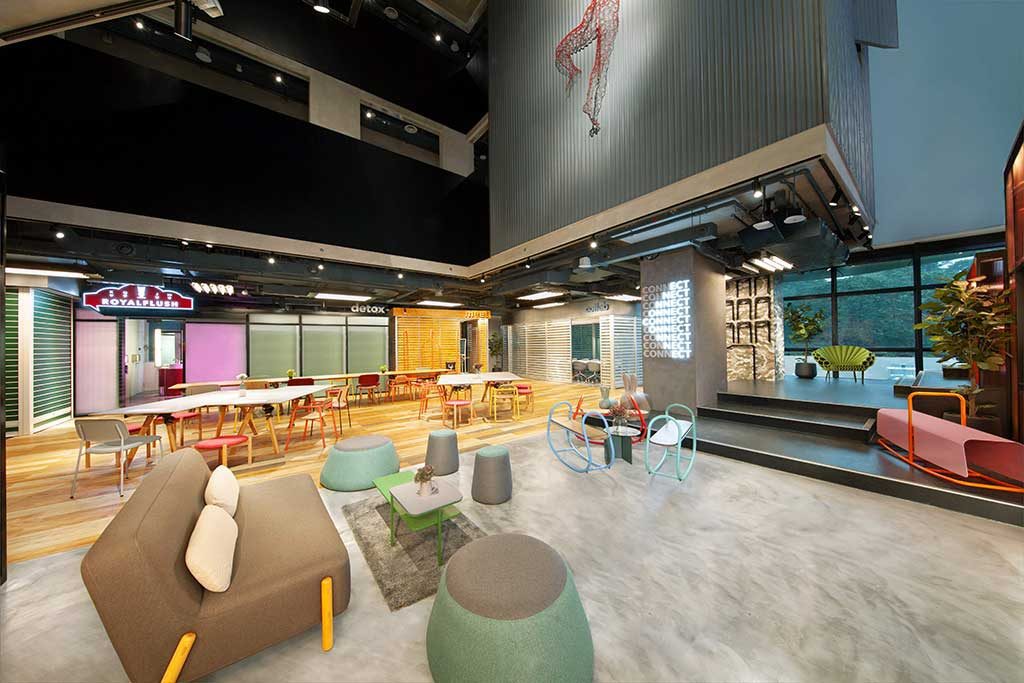 The colorful lounge and coworking area at lyf’s Sinagpore space.

The largest coliving space in South East Asia recently opened in Singapore. It is a 9-story coliving development that spans 121,000 square feet with 279 apartments totaling 412 rooms.

It shows how big developers are taking note of this rising lifestyle and work trend among Millennials. Lyf Funan (pronounced “life” and they prefer it to be in lowercase letters) was built by Singaporean real estate developer CapitaLand’s lodging business unit called The Ascott.

Lyf is marketed as “managed by millennials for millennials and millennial-minded” and the company has plans to aggressively expand throughout China, Thailand, and other Asian countries. 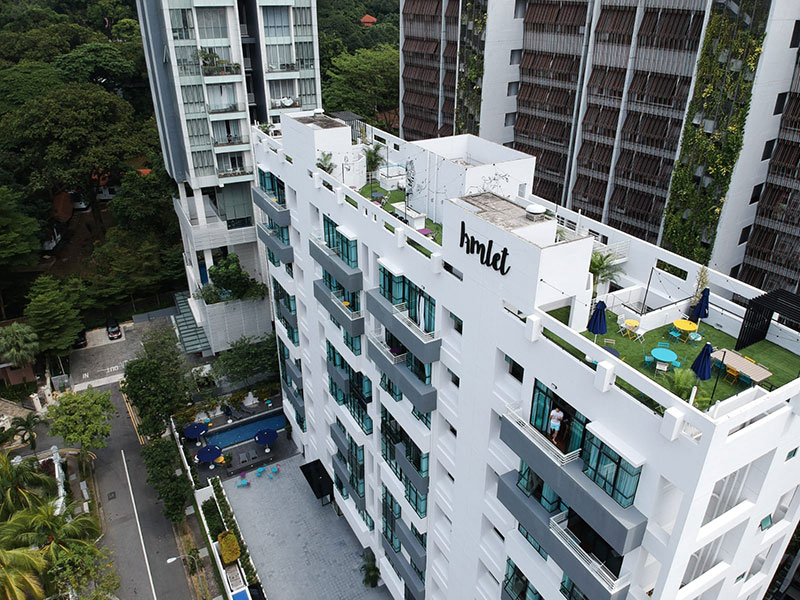 The view of Hmlet’s coliving space and rooftop lounge in Singapore.

Hmlet is building a community of coliving spaces in some of the most expensive cities in Asia that cater to the Millenial demographic.

They appear to be like an AirBNB for coliving platform that allows landlords and investors to turn their real estate into coliving spaces with Hmlet managing the spaces and building the wider communities. 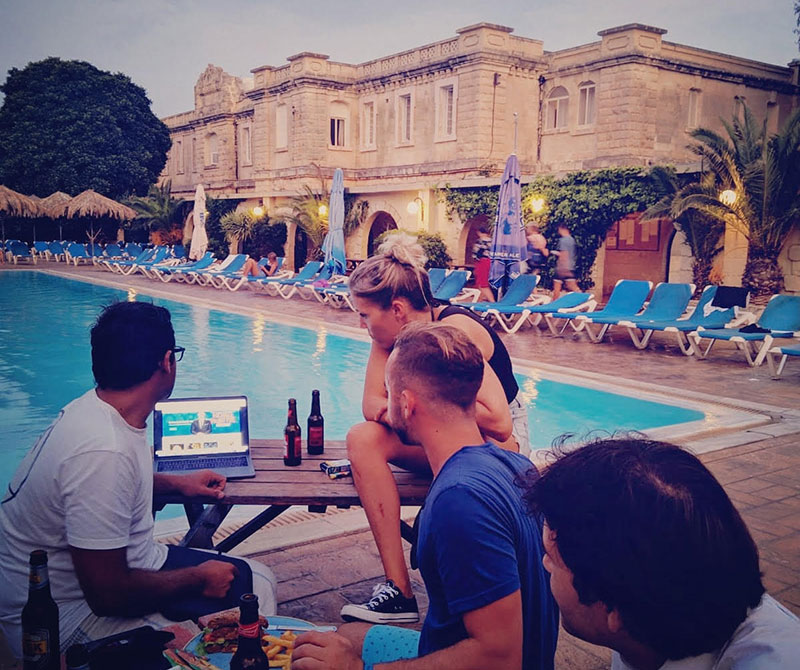 Poolside at CocoHub’s Coliving and Coworking Campus on the island of Malta.

CoCoHub started in 2016 with a vision to put the small Mediterranean island of Malta on the map for digital nomads. They succeeded.

They recently opened an ambitious coliving and coworking campus in Malta in October of 2019.

Their new coliving campus looks pretty impressive and while they only have a single coliving location at the moment, this is an idea that will spread. 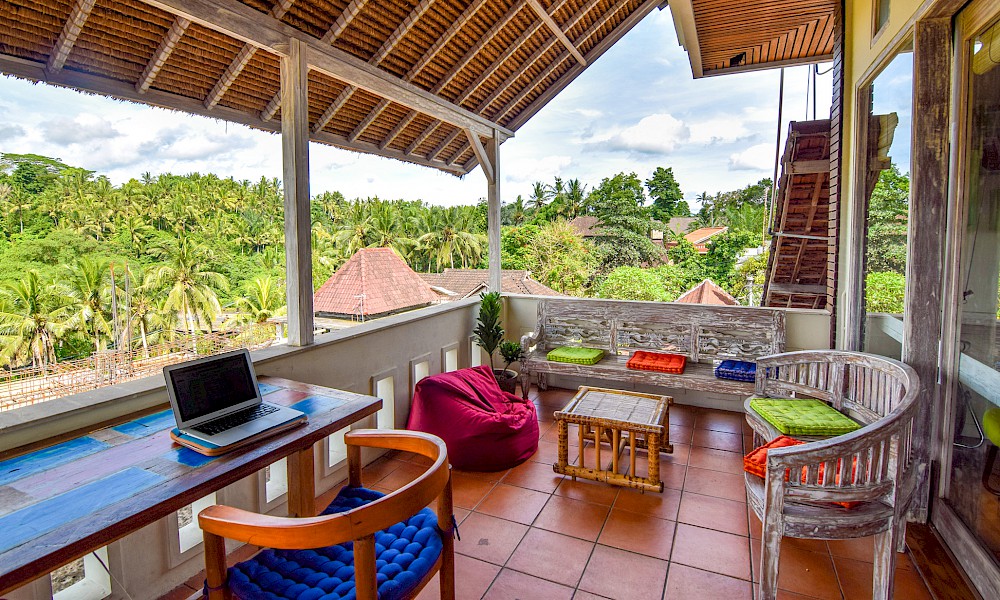 Your very own mobile office overlooking the Balinese jungle at Outpost in Ubud.

Outpost is a growing network of coliving spaces for location independent entrepreneurs and nomadic creative professionals in South East Asia.

They started out as a single coworking space in Ubud, Bali and they have now grown to 4 coliving locations across South East Asia. They recently acquired the beautiful Ubud coliving property formerly run by early coliving pioneers Roam.

Outpost puts a big focus on community and making it easy for team retreats and group travel. 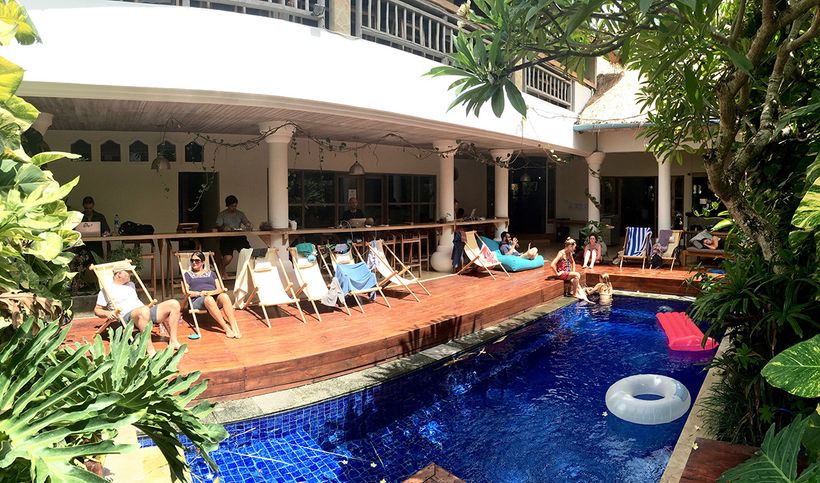 Dojo has one of the best coworking spaces in the world. Enjoy the pool in your office.

They recently added a coliving space, which provides 4 different accommodation options, ranging from large bungalows to budget one-bedrooms. The common areas include a large communal kitchen, a swimming pool and lounge room for games and socializing.

The coliving space is a few minutes away from Dojo Coworking so you’re a short scooter ride away from both work and the world-class surfing on Batu Bolong Beach in Canggu.

If you’re interested in living a coliving space for entrepreneurs, there are a number of different ways to earn your income and enjoy the greater freedom that comes with location independence.

Download my guide to becoming location independent and if you have knowledge and expertise that you can teach, then take my brand storytelling training and learn how to sell your expertise to a global audience.